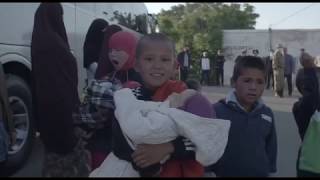 From January to June, 2019, the “Zhusan” operation was carried out to withdraw Kazakh citizens from Syria, who were previously involved in the “Islamic state” and were held captive by Kurdish groups of “Syrian democratic forces”. Translated from the Kazakh language, the name “Zhusan” means “bitter wormwood”, which for nomads is associated with the smell of the homeland. This underlines the humanitarian character of the entire rescue operation, primarily of women and children
English